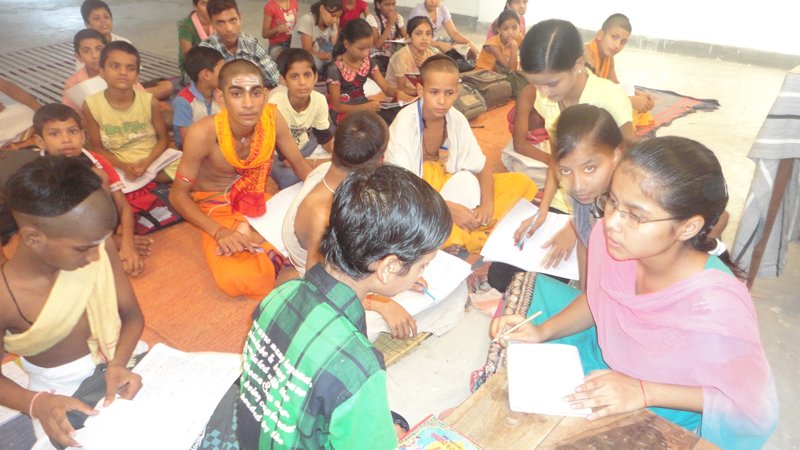 Pondero International – Education and Growth: Nourishing the very poorest to develop and succeed

Lucy Guest will talk from India about the essence of Yoga with reference to Philosophy, Sanskrit and Science and its importance for creating a foundation for life in education and its importance in her charitable projects in India. Education has two meanings coming from latin educare, as is commonly understood and educere, meaning to lead out, to bring out. This second meaning was the foundation of the ancient education system in India over many thousands of years. It used tools such as yoga – meaning stable wisdom or stable intellect and the vibrations of Vedas. These tools are now also being shown to have a scientific basis through analysis of Brain MRI scans, stress testing and emotional Intelligence tests to name a few. There is also research from Harvard referred to as the “Sanskrit Effect” referring to unusually larger grey matter in those that have memorised the Vedas.

All proceeds from Lucy’s talk will go to the Yoga Mission and a recording will be available for those unable to attend the live talk.

The Yoga Mission is a charitable organisation running educational projects in Varanasi India. Varanasi is a city situated in Uttar Pradesh, which is one of four Indian states which the UN has declared to be poorer than the 40 poorest African countries added together.

The Yoga Mission does not simply provide children with literacy skills: it offers a stable, nurturing environment for children who, for many reasons, are in need. An alarming report by UNESCO recently concluded that 90% of underprivileged Indian children are illiterate, even those who attend state-run schools. Girls are the most likely to miss out on an education, and our mission is to reverse this trend by employing a largely female staff in order to offer a safe and non-threatening learning environment to female pupils. This has the added beneﬁt of providing jobs for local women (many of them former pupils themselves) so that they can support themselves, while being able to pay for their own further education.

In the city, by taking children off the streets and offering them stability and education, they show them the way out of the poverty trap, changing not only their lives, but all those around them. In this way improving the community one child at a time. In rural areas the Yoga Mission aims to work from within the community for sustainable development based on ancient traditions, leading to conscious living, empowerment of women and education.

Real education is about bringing the knowledge out from within.